This study tried to observe the correlation and coherency between sea surface temperature (SST) and wind velocity in the Malacca Strait at the year of 2015. The SST and wind velocity data with 6 hours interval step have been used in this study. S-Transform, the Cross Wavelet Transform, and the Wavelet Coherency were applied to observe the influence of the variation of sea surface temperature to the wind velocity in Malacca Strait. These methods could produce the phase lag and the time of occurrence between them. S-Transform was used to show the spectrum energy of the sea surface temperature variation. The strongest correlation between them has the period of 32 days during July to August and October to November at each point with significance level of 95 %. The coherency of them has the range of 4 to 64 days at each point. The last result is the spectrum energy of SST variation that has the period of 5 to 50 days at each point. It was similar to the result of the correlation and coherence period between the wind velocity and the SST data 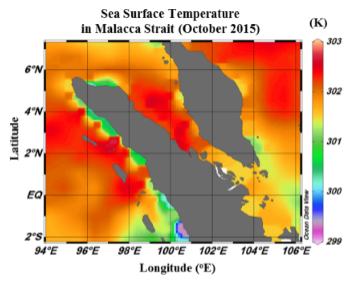