The Tumpangpitu high sulfidation (HS) epithermal gold deposit is located in the south coast of East Java, Banyuwangi District, East Java Province, Indonesia. This area lies within the central portion of the Cenozoic Sunda‐Banda magmatic arc which trends southeast from northern Sumatra to west Java then eastward through east Java, Bali, Lombok, Sumbawa and terminating at Banda sea. The geology of the Tumpangpitu is predominantly occupied by Late Oligocene to Middle Miocene low-K calc-alkaline to alkaline andesitic volcanic rocks and interbedded with volcaniclastic rock sequences, which are associated with low-K intermediate intrusions. The mineralization style at the Tumpangpitu area is composed of a high‐sulfidation (HS) epithermal gold-copper system which is typically associated with concealed gold-rich porphyry copper system. The HS epithermal mineralization is hosted by volcanic and volcaniclastic rocks in this research area. The mineralization domains are divided into Zone A, Zone B and Zone C which are situated along NW-SE-trending silica ledges zones. The HS epithermal mineralization is texturally occurs as vuggy replacements mineralization as well as stockworks, disseminated forms, fractures and veins. Fluid inclusion study was conducted for 6 quartz vein samples which petrographically entrapped fluid inclusions. Homogenization temperature (Th) and melting temperature (Tm) can microthermometrically be determined by fluid inclusion analysis. The average homogenization temperature (Th) of the fluid inclusions gives 180˚C to 342˚C and melting temperature are from -0.1 ˚C to -1.4˚C. Tm corresponds to the salinities ranging from 0.1 to 4.5 wt% NaCl equivalent. The paleodepth of ore formation can be estimated from the salinity of fluid. Since the deposit was not formed at boiling condition, the minimum paleodepth of ore (quartz) samples taken from both shallow level (53.35 m) and deep level (135.15 m) is determined at 650m and 1,220 m, respectively. The microthermometric data point out that the Tumpangpitu deposit formed at moderate temperature and low salinity by magmatic fluid mixing and dilution by meteoric water during the hydrothermal fluid evolution. On the basis of the fluid inclusion microthermometric data and its other key characteristics, the Tumpangpitu gold mineralization shares some similarities compared to other typical HS-epithermal gold deposits worlwide although it also shares few differences.

Hass, J.L., 1971. The Effect of Salinity on the Maximum Thermal Gradient of a Hydrothermal System at Hydrostatic Pressure, Economic Geology 66, 940–946. 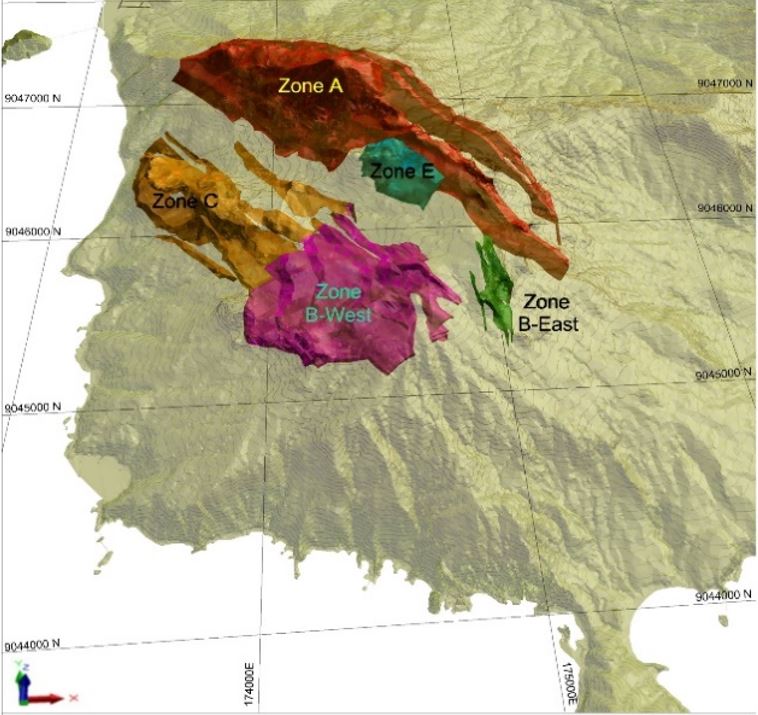