In Indonesia, gold is commonly mined from epithermal-, porphyry-, and skarn-type deposits that are commonly found in volcanic belts along island arcs or active continental margin settings. Numerous gold prospects, however, were recently discovered in association with metamorphic rocks. This paper focuses on metamorphic rock-hosted gold mineralization in Eastern Indonesia, in particular the Bombana (SE Sulawesi) and Buru Island (Maluku) prospects. At Bombana, gold-bearing quartz-veins are hosted by the Pompangeo metamorphic complex. Sheared, segmented veins vary in thickness from 2 cm to 2 m. Gold is mainly present in the form of ‘free gold’ among silicate minerals and closely related to cinnabar, stibnite, tripuhyite, and in places, minor arsenopyrite. The gold distribution is erratic, however, ranging from below detection limit up to 134 g/t. At least three generations of veins are identified. The first is parallel to the foliation, the second crosscuts the first generation of veins as well as the foliation, and the late-stage laminated deformed quartz-calcite vein represents the third mineralization stage. The early veins are mostly massive to crystalline, occasionally brecciated, and sigmoidal, whereas the second-stage veins are narrower than the first ones and less subjected to brecciation. Gold grades in the second- and third-stage veins are on average higher than that in the earlier veins. Microthermometric and Raman spectrometric studies of fluid inclusions indicate abundant H2O-NaCl and minor H2O-NaCl-CO2 fluids. Homogenization temperatures and salinities vary from 114 to 283 ºC and 0.35 to 9.08 wt.% NaCl eq., respectively. Crush-leach analysis of fluid inclusions suggests that the halogen fluid chemistry is not identical to sea water, magmatic or epithermal related fluids, but tends to be similar to fluids in mesothermal-type gold deposits. In Buru Island (Gunung Botak and Gogorea prospects), two distinct generations of quartz veins are identified. Early quartz veins are segmented, sigmoidal discontinuous and parallel to the foliation of the host rock. This generation of quartz veins is characterized by crystalline relatively clear quartz, and weakly mineralized with low sulfide and gold contents. The second type of quartz veins occurs within the ‘mineralized zone’ of about 100 m in width and ~1,000 m in length. Gold mineralization is intensely overprinted by argillic alteration. The mineralization-alteration zone is probably parallel to the mica schist foliation and strongly controlled by N-S or NE-SW-trending structures. Gold-bearing quartz veins are characterized by banded texture particularly following host rock foliation and sulphide banding, brecciated and rare bladed-like texture. Alteration types consist of propylitic (chlorite, calcite, sericite), argillic and carbonation represented by graphite banding and carbon flakes. Ore mineral comprises pyrite, native gold, pyrrhotite, and arsenopyrite. Cinnabar and stibnite are present in association with gold. Ore chemistry indicates that 11 out of 15 samples yielded more than 1 g/t Au, in which 6 of them graded in excess of 3 g/t Au. All high-grade samples are composed of limonite or partly contain limonitic material. This suggests the process of supergene enrichment. Interestingly, most of the high-grade samples contain also high concentrations of As (up to 991ppm), Sb (up to 885ppm), and Hg (up to 75ppm). Fluid inclusions in both quartz vein types consist of 4 phases including L-rich, V-rich, L-V-rich and L1-L2-V (CO2)-rich phases. The mineralizing hydrothermal fluid typically is CO2-rich, of moderate temperature (300-400 ºC), and low salinity (0.36 to 0.54 wt.% NaCl eq). Based on those key features, gold mineralization in Bombana and Buru Island tends to meet the characteristics of orogenic, mesothermal types of gold deposit. Metamorphic rock-hosted gold deposits could represent the new targets for gold exploration particularly in Eastern Indonesia. 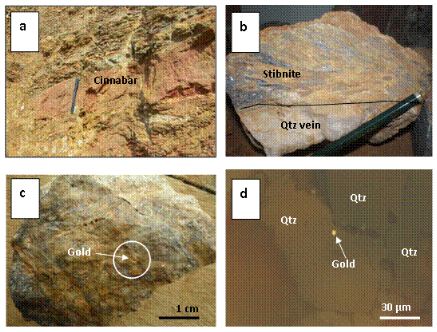