The Cisuru area is located in Talegong Sub-district, Garut Regency, West Java, Indonesia which is belongs to the central part of Southern Mountain Slope. The aim of this research is to understand the nature and characteristic of fluid inclusion from quartz veins (especially drill core samples) in the study area. Rock units in the area are characterized by Tertiary volcanic rocks and volcaniclastic sequence which is mainly composed of andesite, andesitic breccia, volcanic breccia, lapilli tuff, dacite and related to the intrusion of diorite. The Cisuru epithermal mineralization is dominantly hosted by andesite, dacite, breccia and lapilli tuff, and would probably be controlled by both permeable rocks and NS and NE-SW trending strike-slip faults. The mineralization is shown as void filling and replacement within the silica zone, veinlets along with the open space/fractures and dissemination. Fluid inclusion from quartz veins was studied to know nature, characteristics and origin of hydrothermal fluids. Microthermometric measurements of fluid inclusions were realized by using a Linkam THMSG 600 combined freezing and heating stages. Homogenization temperature and final ice melting temperature were measured for primary two-phase inclusion from quartz veins. Base on the study of the fluid inclusion, the value of homogenization temperature (Th) range from 200 ºC to 395 °C and ice melting temperature range from -0.1 to - 4.5 where salinity range from 0.2 to 7.2 wt. % NaCl equivalent. Fluid inclusion petrography and microthermometric measurement data exhibit that fluid mixing, dilution and boiling were main processes during the hydrothermal evolution.  The formation temperature of each quartz vein is 260 ºC to 290 ºC and also their formation depth is estimated between 560m to 925m respectively. Combination of fluid inclusions petrography, microthermometric measurement, and estimate paleo depth from Cisuru area were suggested under the epithermal environment.

Arribas, A. Jr., 1995, Characteristics of high-sulfidation epithermal deposits, and their relation to magmatic fluid: Mineralogical Association of Canada Short Course, 23, 419–454

Soeria-Atmadja, R., Suparka. S., Abdullah. C., Noeradi. D., and Sutanto, 1998. Magmatism in Western Indonesia, the trapping of the Sumba Block and the gateways to the east of Sundaland. Journal of Asia Earth Science, 16,1, 1-12. 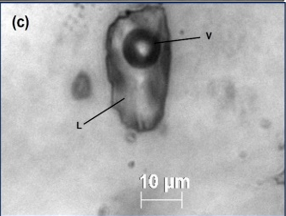 JGEET by http://journal.uir.ac.id/index.php/JGEET is licensed under a Creative Commons Attribution-ShareAlike 4.0 International License. Published by UIR Press