This study discusses Indonesian diplomacy related to the GRTKF legal-text at WIPO in 2010-2014 relating to the “Enhancing the Role and Diplomacy of Indonesia in the Multilateral Field” Ministry of Foreign Affairs of the Republic of Indonesia. The research objective is to analyze and find out what diplomacy has been carried out by Indonesia related to the ratification of the GRTKF Legal-text in the Indonesian Ministry of Foreign Affairs Program. The research method used is qualitative research that is explicit to concludes that the Government of Indonesia has sought to increase the role and diplomacy of Indonesia in seeking legal text as the protection for GRTKF at the international level. The diplomacy was carried out by being actively involved in the WIPO IGC-GRTKF negotiations, initiates the formation of Like-Minded Countries Meetings (LMCs) to consolidate a joint position in the coalition with other developing countries. However, the LMCs coalition doesn't yet have sufficient strength in the IGC-GRTKF negotiations. This is due to the opposition from developed countries which consider that GRTKF protection has not yet become an international urgency. Therefore, Indonesia also approaches non-LMCs countries. However, the diplomacy was carried out by Indonesia at WIPO in 2010-2014 runs very toughly. 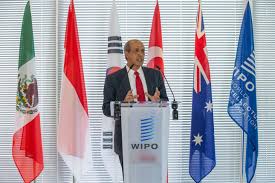